Horseracing rules written on a 2,000-year-old tablet were uncovered in the Beyşehir district of the Central Anatolian province of Konya on May 2.

The tablet, which is part of the Lukuyanus Monument, was apparently built to honor a jockey named Lukuyanus, who died at an early age in the Pisidia era.

Professor Hasan Bahar from Selçuk University’s History Department said the tablet was found at the site of an ancient hippodrome.

“This place was the site of a hippodrome. This tablet refers to a Roman jockey named Lukuyanus. From this tablet we can better understand that horse races and horse breeding were done in this area,” Bahar said, adding that the Hittites built such monuments for the surrounding mountains, which they believed were holy. Artist’s impression of the surface of one of the three planets orbiting an ultracool dwarf star just 40 light years from Earth. (ESO/M. Kornmesser)

It seems like scientists are finding potentially habitable planets all the time these days, and they are — the Kepler Space Telescope is very, very good at its job, even though it’s technically broken. But the three exoplanets described Monday in the journal Nature manage to stand apart: According to the scientists who discovered this trio, the Earth-like worlds might represent our best-ever shot at finding signs of alien life.

The three planets were detected based on the dimming of the star they orbit, which has been named TRAPPIST-1 for the telescope it was discovered with (TRAnsiting Planets and PlanetesImals Small Telescope). As the three planets orbit, transiting in front of TRAPPIST-1 from the telescope’s perspective, the star blinks and dims out of our view. Scientists use this dimming to calculate the size of the planets and their distance from their host star. Because planet composition is closely tied to these metrics, scientists can say with confidence whether a world is rocky, like Earth — as opposed to a massive planet composed of gas or ice — and whether it could host liquid water.

The three worlds are close by, located just 40 light years away in the constellation Aquarius — the water bearer. But the fact that they’re Earth-like and promising doesn’t mean these planets actually hold water.

The wreck of a Spanish ship laden with treasure that was sunk by the British more than 300 years ago has been found, says Colombian President Juan Manuel Santos.

“Great news! We have found the San Jose galleon,” the president tweeted.

The wreck was discovered near the port city of Cartagena.

It has been described as the holy grail of shipwrecks, as the ship was carrying one of the largest amounts of valuables ever to have been lost at sea.

The San Jose was carrying gold, silver, gems and jewellery collected in the South American colonies to be shipped to Spain’s king to help finance his war of succession against the British when it was sunk in June 1708.

The vessel was attacked by a British warship just outside Cartagena.

Colombian officials would not reveal the precise location of the wreck, but Mr Santos said the find “constitutes one of the greatest – if not the biggest, as some say – discoveries of submerged patrimony in the history of mankind”.

He said that a museum would be built in Cartagena to house the ship’s treasures.

Ownership of the wreck has been the subject of a long-running legal row.

The Colombian government did not mention its long-running quarrel with US-based salvage company Sea Search Armada (SSA) over claims to the treasure.

A group now owned by SSA said in 1981 that it had located the area in which the ship sank.

SSA has been claiming billions of dollars for breach of contract from the Colombian government, but in 2011 an American court ruled that the galleon was the property of the Colombian state.

The graves were dug in a hurry, experts say

Construction work in the German city of Frankfurt has unearthed the skeletons of 200 French soldiers from the army of Napoleon Bonaparte, experts say.

Olaf Cunitz, the city’s head of planning, said the soldiers were believed to be from Napoleon’s Grand Army retreating from Russia in 1813.

He said they had probably died from battle wounds or from typhus.

The skeletons were found in the city’s western Roedelheim district.

Andrea Hampel, heritage and historic monuments director for Frankfurt, said it appeared that the mass graves were dug “in an emergency”.

She said that the victims had been buried in coffins which were aligned in a north-south axis, rather that the traditional east-west orientation, suggesting they were buried in haste.

More than 30 skeletons have been excavated so far and work on the others is expected to take four to six weeks.

Napoleon’s 600,000-strong Grand Army invaded Russia in June 1812 and took Moscow in September. However, it suffered catastrophic losses and was forced to retreat. Of the original invasion force, only about 90,000 are believed to have made it back to France.

It is hoped the excavations will reveal how the soldiers died

Homo naledi, a new species of the genus Homo from the Dinaledi Chamber, South Africa

Dinaledi skeletal specimens. The figure includes approximately all of the material incorporated in this diagnosis, including the holotype specimen, paratypes and referred material. These make up 737 partial or complete anatomical elements, many of which consist of several refitted specimens. Specimens not identified to element, such as non-diagnostic long bone or cranial fragments, and a subset of fragile specimens are not shown here. The ‘skeleton’ layout in the center of the photo is a composite of elements that represent multiple individuals. This view is foreshortened; the table upon which the bones are arranged is 120-cm wide for scale.

Homo naledi is a previously-unknown species of extinct hominin discovered within the Dinaledi Chamber of the Rising Star cave system, Cradle of Humankind, South Africa. This species is characterized by body mass and stature similar to small-bodied human populations but a small endocranial volume similar to australopiths. Cranial morphology of H. naledi is unique, but most similar to early Homo species including Homo erectus, Homo habilis or Homo rudolfensis. While primitive, the dentition is generally small and simple in occlusal morphology. H. naledi has humanlike manipulatory adaptations of the hand and wrist. It also exhibits a humanlike foot and lower limb. These humanlike aspects are contrasted in the postcrania with a more primitive or australopith-like trunk, shoulder, pelvis and proximal femur. Representing at least 15 individuals with most skeletal elements repeated multiple times, this is the largest assemblage of a single species of hominins yet discovered in Africa.

A Roman-era Egyptian mummy portrait, shown in natural light shows no traces of the blue pigments underneath. Photo: Phoebe A. Hearst Museum of Anthropology, University of California, Berkeley

Scientists and art conservators have discovered blue pigment used for subtle shading in ancient portraits, defying expectations for how the ancients used the synthetic pigment.

The findings come from a joint team from Northwestern University and the Phoebe A. Hearst Museum of Anthropology at the University of California, Berkeley, which studied 15 Roman-era portraits of Egyptian mummies excavated over a century ago.

Synthetic pigment was found in six of the 15 paintings, but the blue was beneath or in conjunction with other more common colors. Developed by the ancient Egyptians, the pigment was manufactured from silica, lime, copper, and alkali.

“The discovery changes our understanding of how this particular pigment was used by artists in the second century A.D.,” said Marc Walton, a scientist at Northwestern University, in a statement. “I suspect we will start to find unusual uses of this colorant in a lot of different works of art, such as wall paintings and sculpture.” The Roman-era Egyptian mummy portraits in natural light show no traces of the blue pigments underneath. Photo: Phoebe A. Hearst Museum of Anthropology, University of California, Berkeley.

Egyptian blue was popular in the Mediterranean region prior to the Greek period, when the palette was largely limited to yellow, red, black, and white. Most Roman-era painters took their cues from the Greeks—or so it appears to the naked eye.

“When we started doing our analysis, all of a sudden we started to see strange occurrences of this blue pigment, which luminesces,” explained Walton. “We concluded that although the painters were trying hard not to show they were using this color, they were definitely using blue.”

“We see how these artists manipulated a small palette of pigments, including this unusual use of Egyptian blue, to create a much broader spectrum of hues,” added Hearst Museum conservator Jane L. Williams.

The team, working together as part of the Northwestern University-Art Institute of Chicago Center for Scientific Studies in the Arts, has released their findings in a study published in Applied Physics A, a peer-reviewed journal. 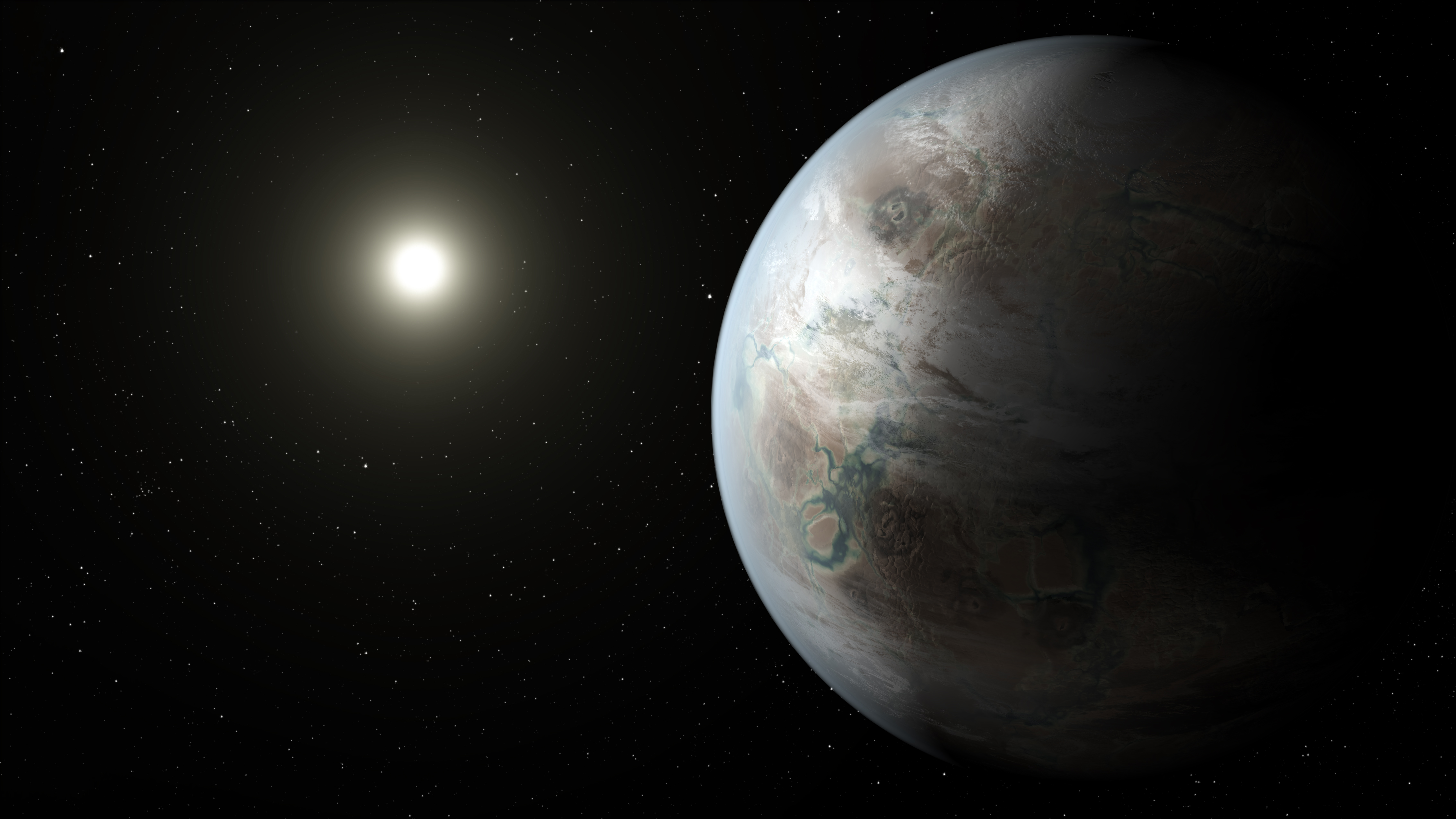 Soaking up the Rays of a Sun-like Star – Artistic Concept This artist’s concept depicts one possible appearance of the planet Kepler-452b, the first near-Earth-size world to be found in the habitable zone of star that is similar to our sun. The habitable zone is a region around a star where temperatures are right for water — an essential ingredient for life as we know it — to pool on the surface. Scientists do not know if Kepler-452b can support life or not. What is known about the planet is that it is about 60 percent larger than Earth, placing it in a class of planets dubbed “super-Earths.” While its mass and composition are not yet determined, previous research suggests that planets the size of Kepler-452b have a better than even chance of being rocky. Kepler-452b orbits its star every 385 days. The planet’s star is about 1,400 light-years away in the constellation Cygnus. It is a G2-type star like our sun, with nearly the same temperature and mass. This star is 6 billion years old, 1.5 billion years older than our sun. As stars age, they grow in size and give out more energy, warming up their planets over time. Image credit: NASA Ames/JPL-Caltech/T. Pyle 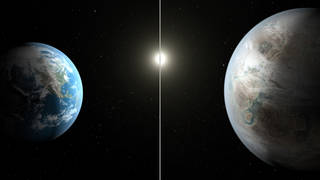 NASA’s Kepler mission has confirmed the first near-Earth-size planet in the “habitable zone” around a sun-like star. This discovery and the introduction of 11 other new small habitable zone candidate planets mark another milestone in the journey to finding another “Earth.”

The newly discovered Kepler-452b is the smallest planet to date discovered orbiting in the habitable zone — the area around a star where liquid water could pool on the surface of an orbiting planet of a G2-type star, like our sun. The confirmation of Kepler-452b brings the total number of confirmed planets to 1,030.

END_OF_DOCUMENT_TOKEN_TO_BE_REPLACED

Human evolutionary scholars have long supposed that the earliest stone tools were made by the genus Homo and that this technological development was directly linked to climate change and the spread of savannah grasslands. New fieldwork in West Turkana, Kenya, has identified evidence of much earlier hominin technological behaviour. We report the discovery of Lomekwi 3, a 3.3-million-year-old archaeological site where in situ stone artefacts occur in spatiotemporal association with Pliocene hominin fossils in a wooded palaeoenvironment. The Lomekwi 3 knappers, with a developing understanding of stone’s fracture properties, combined core reduction with battering activities. Given the implications of the Lomekwi 3 assemblage for models aiming to converge environmental change, hominin evolution and technological origins, we propose for it the name ‘Lomekwian’, which predates the Oldowan by 700,000 years and marks a new beginning to the known archaeological record.